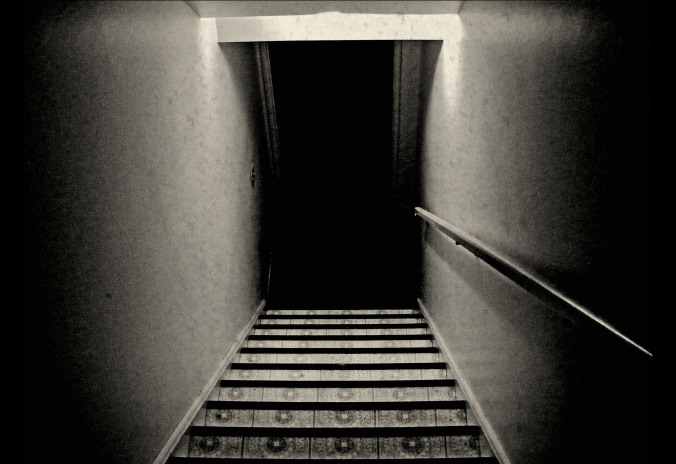 When I was young our house had a basement, and my bedroom was in that basement.  Every day I had to go up and down a set of stairs.  Adjacent to the stairs was a storage room, which I thought of as the seventh layer of hell.  I was convinced that some combination of the devil, the boogeyman, and the grim reaper lived in that room.  I can remember telling myself over and over again that I was capable of walking up the stairs.  Every time I tried, I would feel the creatures sneaking up behind me, and I almost always ended up running for my life.

When I look back, all I can do is laugh.  I was a young kid, scared of the dark.  The fear, which felt like a matter of life and death, was irrational, and completely consumed me.  At the time, I had no way of knowing, I didn’t have enough laps around the sun to understand.  I would like to think we all have a similar experience, something that scared us when we were younger that we can look back on and laugh.  I would like to think that we learn to deal with our fears as we age, I have my concerns.

As I grew up, the things that “scared” me evolved.  They ranged from performance at sports, academic environments, and physical confrontation, to situations that had extremely serious and fatal consequences.  I vividly remember my first encounters with combat, the first time I was shot at, the first time I shot at someone, my first time standing on the open ramp of an aircraft at 25k feet staring into the abyss.  To say that an element of fear existed in those environments would be an understatement.  Some of those situations are very unique to my old job, the fear is not.  Every single human being on earth will encounter fear, the only variable is how you choose to handle it.

Fear is not justification for action.  I have had my life in jeopardy more times than most, and I have never used it to justify a single action.  It is an unacceptable excuse for taking a life, running away, or running your mouth.   It is an emotion, and like all emotions, we each have a choice as to how much power it is granted.

Pick a stereotypical “A type” personality that most would consider “fearless”.  Maybe it is a SWAT cop, perhaps a firefighter running into a burning building, or even a Tier One, Special Operations Solider.  It is easy to focus on the fancy guns and snazzy outfits that these people wear, but those things are only tools.  These professions and those individuals are not defined by the equipment they use, they are defined by their actions.  The best equipment on earth still terminates in a human being, and their ability to use it.  How do they do it?  How do these men and women operate in an environment that would paralyze most?  It is simple, they make a choice.  They choose to face their fear, instead of running from it.  These people have learned that fear does not affect outcome, unless you allow it to change your behavior.  These people realize that there is nothing to be gained by running from what scares you.

Now, find a way to engage that fear.

If you are afraid of public speaking, seek out opportunities to speak.

If you are afraid of ideas, explore them.  Take a sounding on your beliefs, and the beliefs of others.

Regardless of how your sentence reads, it holds both the problem, and the solution.

My sentence reads “I am afraid of failure.”  It is what keeps me up at night, and I use it as motivation.  It drives me to prepare, to train, physically and mentally.  As far as I am concerned, there is no obstacle that can be put in front me that will ever be greater than my desire to get through it, over it, or around it.  When you find my dead body, the fingernails will be missing.  I will never stop clawing my way forward.  There is nothing unique about me, it is simple a choice I have made in my life.  It is there for you to make as well.

If you want to remove the control of fear from your life, stop running from the thing that goes bump in the night, and become it.  Face your fear, and engage it.  Don’t seek safe spaces where ideas and words are protected from the outside world.  Seek spaces that need to be made safe, and make them so.  Seek out those that hold opinions and beliefs that are different from your own, that scare you, and engage them.  Take a sounding on your beliefs, and then stand for them.  Realize that there are things you can control, and things you cannot.  Focus your efforts on those things you can affect, and prepare yourself for those that you cannot.  Fight for inch after inch, until it becomes miles.

All of this happens between your ears.

It is a choice that only you can make, no one can do it for you.

10 thoughts on “Things That Go Bump in The Night”