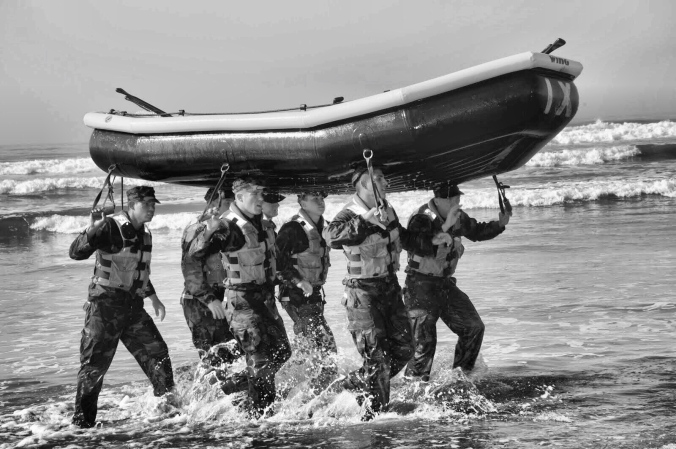 There are Navy SEALs, and there are Team Guys.  Both go through the same training, work at the same team, and wear the same uniform.  The difference exists well beneath the selection process, the name on the side of the building, and the cloth and metal that designate a military occupation.  The distinction between the two is defined by motivation.  One is there for himself, one is there for the Team.  To an insider, it is obvious.  To an outsider, I would imagine that it is impossible to tell the difference.

Becoming a Navy SEAL is not difficult.  Enlist or commission, complete the required training, earn your trident, and your designator in the military system will be changed.  You will forever have earned the right to call yourself a SEAL.  For some, the journey metaphorically ends there.  The title is all they wanted, the title was the singular goal.  They may say the right things, but their actions tell the true story.  To many, it seems like an amazing accomplishment.  It is meaningful in some ways, and meaningless in others.  It is a job title.

Whether you enjoy the publicity that the modern-day SEAL community receives, or it makes you sick to your stomach, it is not going anywhere. The publicity, the movies, and the books are a problem.  They combine to create unrealistic expectations, which in turn create impending failures.  They are a distraction, at best.  They are selective in the stories they tell, much like people are selective in how they “portray” their lives on social media.  The mediums are incomplete, and they lack the ability to unpack a complicated occupation.

The spotlight is dangerous because it constantly tugs at your ego, your desire to be recognized for doing something that many think is impossible.  It appears warm under the spotlight, and it is seductive.  I have felt it myself, and I suspect to one degree or another, everyone does.  If you are not careful, a job title will become all that you have, and all that you will ever be.

The publicity attracts people who are there for the wrong reasons.  It attracts people who are seeking attention, not an outlet to serve others.  It attracts people who want to be known as a SEAL, because they see that “title” as their reward for service, instead of realizing that their service is the reward itself, and a privilege.  They see their service as a tool for their future, something that will open doors that they likely have no business stepping through, instead of as a tool for others, designed to create space for this country and its citizens to be what they choose to be.

The life of a SEAL is hard, both physically and mentally.  We work hard, and yes, we play hard.  We live our lives at the outermost boundary, where many would be extremely uncomfortable.  For some, it becomes the only place where you feel comfortable.  It can be difficult to manage and contain when you lose that outlet, even more so when you leave and lose the camaraderie and support of those you serve with.  The community is not full of choir boys, and it should never be.  Mistakes will be made, and some of them will be catastrophic, and horrific.  The wrong people occasionally make it through.  The mistakes, and those individuals do not reflect the community as a whole.  They stand as a reminder that no process is perfect, and that regardless of the size of the lawn, there will always be weeds.

These characteristics, traits, and struggles are present in every organization, inside of the military and out.  They are not unique to the SEAL Teams, an organization that most consider to sit at the apex, and that is why I use them as an example.  Every organization will have those that are there for the right reason, and those that exist for self-serving purposes.  Some may be in leadership positions, and some may be at the bottom rung, attempting to climb at breakneck speed.  You have no control over those people, you can only control yourself, and you have a choice to make.

A team guy does not care about job title.  A team guy does not care about gear, weapons, uniforms, or any of the other countless “shiny objects” that can distract you.  A team guy does not obsess over what kind of car they drive, what it says on their business card, cubicle, or office wall.   A team guy cares about the mission, and the people to their left and right.  They know the spotlight exists, but they are not willing to step on the heads of those around them to climb in to it.  They would rather arrive together, and share in the reward, than arrive alone, and covet it for themselves.  It is easy to be a SEAL, it is hard to be a Team Guy.

An organization of SEALs may sound impressive, but it’s the organization full of Team Guys that is unstoppable.