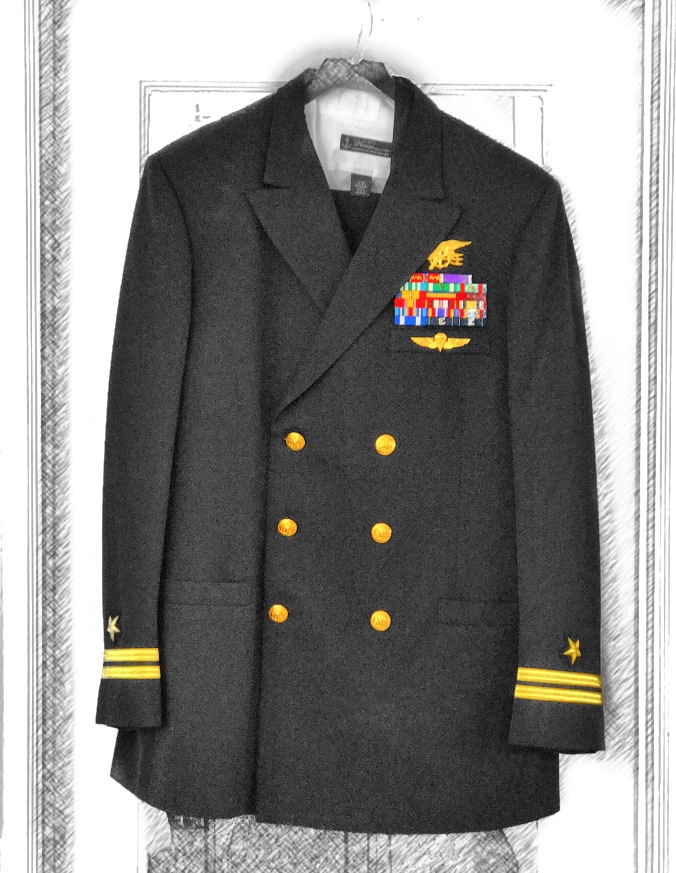 The picture is from my closet, of my uniform, from a life I used to live.  Sometimes I forget that it is hanging there, sometimes it stops me in my tracks.  I can’t describe what it means to me, it would be an attempt to describe the sunset to someone born unable to see.  I have stood proud in that uniform at awards ceremonies, and stood devastated, tears streaming down my face at funerals. The cloth, metal, and ribbons represent 17 years of my adult life, and the dreams of a child.  It now hangs in my closet, under a thin sheet of plastic, and I often question myself as to whether or not I am living up to what it represents.

If you are a veteran, you know these words.  They are the beginning of a journey, from civilian to soldier.  You raised your right hand in the company of strangers and swore an oath, to serve this country, its citizens, and its needs, above your own.  You surrendered constitutionally afforded rights in the hopes that others would never have to.  In my lifetime this has only been a voluntary choice, but that has not always been the case.  It may seem a like a lifetime ago, but the last man drafted into military service was on June 30th, 1973.  A mere four years, and four months before I was born.  Imagine the difference between a voluntary decision, and placing your life on hold to answer the call of a nation.

Throughout our history roughly 2 percent of our population is serving on active duty at any given time.  It fluctuates, with peak levels occurring during WW2, with 12 percent in uniform.  Today, we have a standing military of approximately 1.5 million, representing roughly .05 percent of our current population.  It should be no surprise that there is confusion about our military, and those that serve in it.  Most people know more about Pokémon Go, than those wearing a uniform.

Military service is open to all, absent medical and educational requirements, but it is not for everyone.  For some, it is an escape from a social or economic environment.  For others, the opportunity to pay for a higher education.  Some define the “silver spoon”, some come from military families, and some come from the ghetto.  I served with every race, religion, and sex.  It was a melting pot; we all wore the same uniform.

All service is honorable, but not all service is the same.  There are vast differences between military occupations, nearly all are invisible to civilians.  Many deploy to combat zones, but most do not see combat.   The percentage of job occupations that exist to directly engage with an enemy is quite small, especially outside of the Army and Marines.  This is often used as a yardstick of value inside of the military.  It is easy to think one job has more value than another, especially in the modern day as we continue a fight against terrorism.  If you think like this, you are missing the forest for the trees.  As a soldier whose job it was to fight, my job would not have been possible without the support of those whose job it was NOT to fight.  It is unlikely that many books will ever be written about those who serve in a support capacity, but NO books would ever be written without them.  I would literally be unable to do my job if it were not those for those that supported and enabled me.  I thank them at every opportunity.  Their service carries the same value, and importance as mine, period.

While serving you are insulated and surrounded by the military machine.  Each service has unique uniforms, ranks, insignia, and languages.  Acronyms are the norm in both speech and writing.  You work on military installations, surrounded by peers steeped in the same cultures and traditions.  Experiences are unique, and at some point you stop trying to explain them to others.  I have seen unmatched beauty in the Hindu Kush during winter, and stereotypical scenes of war in the summer.  Both occurred in the same place, fortunately far from where I call home.  It can be difficult to maintain a sense of connection with those not serving.  Shared values are often difficult to find, at least that was the case for me.  It still is.

The horrors of war and combat are real.  Fortunately, so is the treatment and help.  Everyone has a cup, unique in both dimension and capacity.  Some can hold more than others, but eventually, if unchecked, regardless of who you are, it will overflow.  When that happens, you will need the help of others.  Thankfully, this country is bursting with patriotism.  There are countless organizations, initiatives, and individuals lining up, ready, willing, and able to help.  I cannot imagine the struggle and pain that many veterans face on a daily basis.  I know it is real, hard numbers tell me so.  I cannot fathom a place where the thought of taking your own life seems like the most viable option, but I know that for many it is their reality.

We will all have struggles; it is your choice as to whether or not they define you.  Embody the principles and ethos of your previous service and face them head on.  Many think that reaching out for help is weakness, when in reality is a sign of incredible strength.  Although there is no shortage of outlets for help, the first step must be taken by YOU.  It is not the responsibility of others and organizations to help you get better, it is yours.  If it doesn’t work the first time, try again.  If it doesn’t work the second time, keep trying.  Giving up is never the answer.

At the end of the day, your military service is what you make of it.  It is not a blind exercise in following orders.  If you are willing, it is the land of opportunity.  Healthcare, treatment, and retirement benefits are well earned, but make no mistake, service to this nation is a PRIVILEGE.  No one owes you anything.

The title of Veteran is extremely powerful leverage.  It conveys instant respect.  People want to hear what you have to say.  They respect your opinion, experience, knowledge, and service.  Individuals and organizations are eager to give thanks, and often to give back.  There are amazing opportunities, some of which lead to problems.   As with any leverage, it is not always used properly.  It is seductive to take the appreciation and opportunities for granted, to expect them, to become entitled.  Your uniform becomes your identity.  You expect preferential treatment, and look down on those that have not served.  You feel as if you have done enough, you have proven yourself.  When this happens, it creates problems for all veterans.  Your service will open many doors, but it will not do the job for you.  If you are not willing to start at the bottom and work your ass off, redefining who you are, you will fail, and the entire veteran community will suffer for it.  I have seen it happen many times, often with the most accomplished veterans I know.  It takes one bad experience, and a potential employer is no longer willing to open the door, for any veteran. A uniform is a uniform; a soldier is a soldier.  Do not expect them to understand.

I feel the pull of my uniform every single day.  It pulls at me to define who I am, and all I will ever be, by the ribbons and metal on my chest.  I wish I could say that I successfully avoid this urge every time, but I don’t.   I fight myself constantly, judging myself via standards I held when I was a SEAL.  I have made decisions and acted out of a sense of what others may think a SEAL should do, as opposed to what I wanted to do, even though I hung up the job more than three years ago.  I am asked often if I am “former” or “retired?”  I don’t know the answer.  All I know is that I do not want the title of “SEAL” as the only thing that defines me.  It should be what I DID, not who I AM.  I have more to offer this country than just my time in uniform, and so do you.

This country needs leadership, and there is no community better suited to step up.  Only recently did I realize that I have greater influence and impact as a civilian.  On the battlefield I was limited by the range of my bullets, no farther than I could see with the naked eye.  That distance is microscopic in comparison to the impact and influence of character and leadership.  Their range is boundless; it can change the landscape of business, community, and hopefully this country.  The first step, is to get out of our own way.

Be more than just a Veteran.

When the sun rises tomorrow, it will be Veterans day.  For those that have never served, take a moment to reflect on the service of others.  Hopefully it has impacted, and improved your life.  Take the time to say Thank You.

If you are a Veteran, you will be surrounded by a nation anxious to give thanks.  Humbly accept it, and remember that your service was for them, not for you.

13 thoughts on “I solemnly swear…”